My interest in photographically documenting the removal of Condit Dam began about 8 years ago, during a year-long project sponsored by US Fish & Wildlife Service and PacifiCorp.  The goal for the year was simply the expansion of public knowledge surrounding the decommissioning.  During that time, Gail Miller and Arianne Poindexter of PacifiCorp provided me with an amazing collection of photos from the company’s archives, which documented most phases of the original construction.  Here were images of the Greek immigrants who built the dam, their housing in great tent camps, the original equipment, and many other aspects of construction.  The photos were likely a tool used by Northwestern Electric Company to monitor implementation of the project by their contractor Stone & Webster of Boston,  Massachusetts.   It’s also likely that they were photographing the work for posterity sake, knowing that their work was shaping the future of the Northwest.

In my work, it soon became obvious that the builders were documenting dam construction using an early “time-lapse” photo technique.  For all its modern complexities, time-lapse is simply the process of taking a sequence of pictures over time from the same vantage point.

Using topographic maps, I was able to roughly determine where their main photo point must have been.  It seemed that their main station had been on the very steep basalt slope above and west of the dam.  Armed with the original photos,  I set-off hiking one morning, starting at the original rock quarry and rock crusher site, and proceeded down the route of the old rock chute to the dam.  After scrambling down and across 100%+ gradient slopes, I found a bare, east facing rock knob, that seemed to provide the original vantage used by Northwestern Electric almost a century before.

The work being done today by Andy and me is centered on documenting the removal of Condit Dam, charting the rapid changes in the reservoir sediments, and capturing a record of vegetation recovery in the recently uncovered “Condit Canyon”.  This is largely being accomplished via photography from the historic west dam photo point (current “Station 1”).

The video below represents a first attempt at compiling a time-lapse sequence of pictures taken at Station 1 over the past 99 years. The first historical image gives a good overview of the canyon’s appearance in  August 1912, and even a glimpse of the exact location of the upstream coffer dam.  The series continues through the date the reservoir filled and water first spilled over the top on March 21, 1913.  It concludes with recent images taken in late October 2011, when the dam was breached. 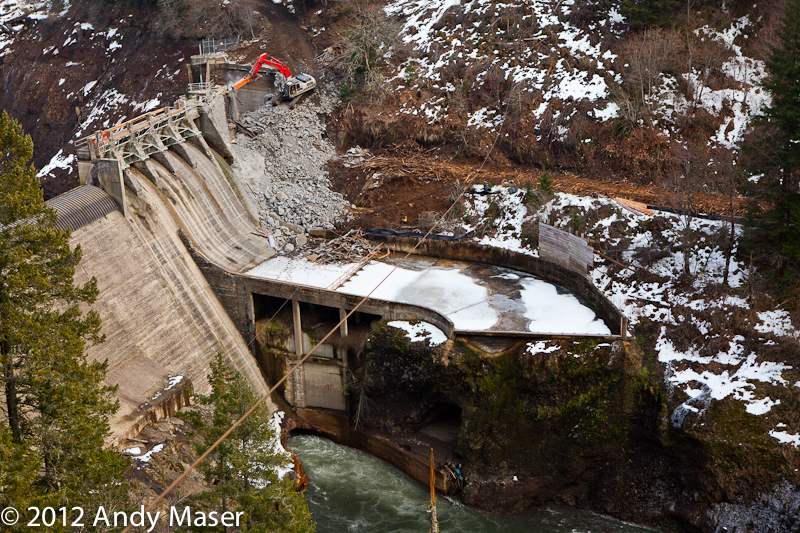 I hiked out to check on the timelapse cameras yesterday and snapped a few photos of crews chipping away at the dam.  Significant progress has already been made–in this photo you can see that the flow line from the dam to the powerhouse has been removed, the building that housed the flow controls is gone and a significant chunk of the concrete structure of the dam has been removed.  Stay tuned for updates as deconstruction continues!

Two remote cameras stationed around Condit Dam will be shooting still images every day for the next several years. When stitched together as a video sequence, these images will provide a never before seen view of large-scale dam removal and river recovery. We'll be posting updates as the project develops, so stay tuned!

All images that appear on this site are copyrighted. Any use of images, video or timelapse video clips is prohibited without permission.

Interested in using media found on this site?  Please email us and we will work with you.