It’s been quite a dynamic 6 weeks on the White Salmon since the October 26th breach of Condit Dam.  Incredible amounts of sediment have moved out of the former reservoir as the river gradually find its way down to the bedrock and into its original channel.  Some of the current sights were predicted–like the emergence of the old cofferdam–others are a total surprise–like the speed at which the uppermost part of the reservoir has eroded.

If you haven’t watched the breach video yet, definitely check it out.  Even if you have seen it, watch it again!

Recently, I headed out to the White Salmon with Rod Engle, a biologist for the US Fish & Wildlife Service, to film a news clip for National Geographic.  That video will premiere online shortly, but I thought I’d share some of what we saw that day in the meantime.

The most surprising update is the amount of sediment downcutting that is happening around the Northwestern Lake Road Bridge.  In Rod’s words, erosion expected to take about a year has happened in only 6 weeks.  Check out these two before and after images by local resident and photographer, Michael Peterson:

You might remember that earlier this fall, the Fish & Wildlife folks rounded up hundreds of wild Tule Chinook Salmon below the dam and transported them upstream to spawn.  The goal was both to prevent them from creating redds (salmon nests) below the dam that would certainly be wiped out during the breach, and to jump start the species recovery process.  Their experiment was proven a success when tons of redds appeared in the upper White Salmon (which helps fuel the debate as to whether using hatcheries in these situations is really necessary–kudos to USFWS and the Yakima Tribe for opting not to go that route on the White Salmon…) 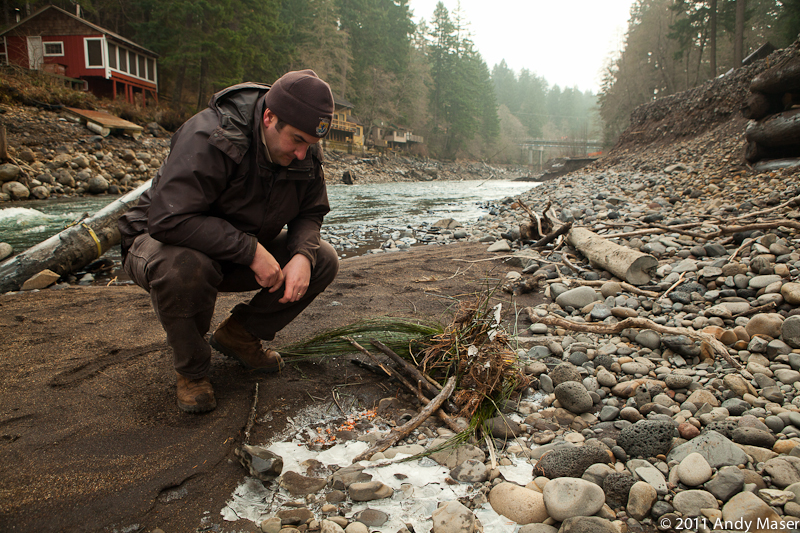 There’s just one problem though…the rapid downcutting exposed some of the redds.  Luckily though, 85% of the documented redds are upstream, out of the path of the downcutting.  It was strange digging around in a threatened salmon redd, but pretty cool to dissect one and really see how it works.

Not much action is happening down at the dam.  The Merit folks have been working on sediment monitoring and figuring out how much active removal will need to happen.  It sounds like the next priorities are to make the whitewater boaters’ takeout usable again and remove the cofferdam.  Incidentally, the takeout is closed both because of sediment and because the foundation of the original bridge was exposed by the downcutting–making the river pretty sketchy.  So, unless you have a friend with riverfront property somewhere upstream of the bridge, there’s really no way to raft or kayak the Lower White Salmon.

What’s happening next with the timelapse project?  Well, the cameras are on autopilot right now–snapping away as things gradually change.  They’ll be running for the next few years as the dam disappears and the landscape settles and revegetates.  Expect another update shortly when my next Condit news clip is released on National Geographic, but otherwise, I’m heading to Baja for some vacation!

Two remote cameras stationed around Condit Dam will be shooting still images every day for the next several years. When stitched together as a video sequence, these images will provide a never before seen view of large-scale dam removal and river recovery. We'll be posting updates as the project develops, so stay tuned!

All images that appear on this site are copyrighted. Any use of images, video or timelapse video clips is prohibited without permission.

Interested in using media found on this site?  Please email us and we will work with you.